(This article was originally published in "Games International", issue #13 and is reproduced here with the permission of Brian Walker, the former GI editor)

There can be few more commercially successful games designers in the world today than Wolfgang Kramer. His Auf Achse alone has sold over half a million to date, while others such as Nikki Lauder's Formel Eins, and Wildlife Adventure remain firm favourites with games players of all ages and preferences. Wolfgang took time out at the recent Essen Games to discuss how he puts it all together. 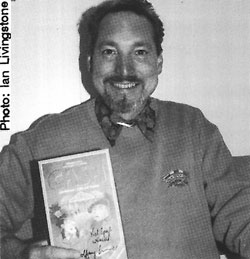 It started when I was a child. My grandma used to play with me; she always used to let me win, so I developed quite a positive feeling about games. When I reached my teens I started buying all the games I could find, though this was in the fifties so there wasn't really much around, just variations of Monopoly and Scrabble. I then started to change some of the games I bought. My friends preferred the 'new' versions and suggested I make some games of my own. At that time I didn't think I was able to, though the idea stayed with me. A few years later I started to study commercial science. In my free time I started to develop ideas for my first game. I've always liked race games, but I didn't want one where you just roll the die and move, so I had to develop a new movement system. I wrote down about twenty possibilities.

Was this how Tempo was born?

Yes, but not straight away, though Tempo was my first published game, in 1974 I think. Tempo was an abstract game using a card based movement system. It took me about a year to refine it to the state where it could be published.

A few years later I modified it and it became Formel Eins. The motor racing theme is not so important. The system is adaptable to virtually any form of racing.

I remember you telling me once that your design approach is system first, theme later.

Yes, that's mostly true, though in the case of Wildlife Adventure the theme came first.

What about Auf Achse?

Again the theme came first, because this was a promotional game originally, which was specially commissioned by a road haulage company.

What is your favourite out of all the games you have designed?

I like Around The World in Eighty Days a lot, and Formel Eins. Although it has sold very well, Auf Achse is not really one of my favourites, likewise Undercover (Heimlich & Co) though they are my games so I stand behind them (laughs).

One of my old games, Coup, is being published by F X Schmid this year with a new theme: it will be called Holiday. There will be a card game from Ravensburger, which I co-authored, called Cash, and also Terra Indium, an abstract game which I did for Kosmos.

The press verdict on this year's ('89) releases was not good. The feeling was that the games were getting too simple.

Yes, I understand what you mean. Ravensburger, MB, Parker, they all want simple games. I think Ravensburger are changing, though. They want to do one or two games with a higher level which will not be so commercial.

Do you play other people's games?

Oh yes. I like Sid Sackson's games very much, and Alex Randolph's. When I'm not playing or working on my own games, I teach games.

There is a school in my town which, like most schools, teaches lots of subjects. I am the games teacher for four evenings a year, anyway.

Do you mean teaching people to design games?

No, how to play games.

What sort of games do you use as an example?

What kind of age group do you teach?

Just adults. I'm also in a local games clubs where we play all the new games.

You seem very thorough and professional in your approach.

Yes, it's very important for me to see what is happening in the market, and also how the public react. I come here to Essen, I go to the Nürnberg Fair. I must know what companies are publishing, and also what the trend for the future is. Also I like to try and understand why certain games get published and others don't. I visit shops and talk to the people who sell games. In the bigger shops I organise promotional visits. I explain my own games to the customers. Some shops have special 'games days' where they have special teachers to explain the games to the public. Like with my visits, there is no money involved but they are valuable promotional exercises.

There seems to be a strong games culture in Germany.

Yes, but only in the last three or four years. In the seventies there was really nothing.

How important was Essen in this evolution?

There were several factors. The 'Game of the Year' was an important step. Also, people have more spare time now. TV too has produced a big counter reaction. Watching television is now considered very passive. With games, people come together and interact. The press picked up on this and now devote quite a lot of space to writing about games.

What are your favourite games, apart from your own?

I like to play Acquire, Hare and Tortoise, Focus, Shark, Amazing Labyrinth, chess too. I played 1830 just recently - quite complex but very, very good. I play all sorts of games.

And long may you continue to do so.