1895 is located in Namibia or "Deutsch-Suedwest Afrika" as it was called at the time. Namibia is situated south of the equator at the west coast of Africa and being a country dominated by the Namib Desert there are not that many cities and possible routes for railroad lines. An interesting "feature" of Namibia is the "Caprivi Zipfel", a strip of land in the north east of Namibia presenting an additional challenge to railway operators. We will see later how the game deals with this.

Railway building in Namibia began with some smaller mining rail lines in 1895 and developed full speed in 1897 when the German Colonial Authority launched a project to build the "Staatsbahn" (state railway) from Swakopmund to Windhoek.

Even earlier, in 1894, the German artist Troost intended to revolutionize the transportation in the desert by replacing the tedious ox-wagons by a steam traction engine hauling several wagons which operated out of Swakopmund.

The engine was imported from its manufacturer Dehne near Halberstadt, Germany and was landed at Walvis Bay. Three months later it was delivered to Troost at Swakopmund. It had practically been pushed the entire distance because of its tendency to dig itself into the deep sand every time an effort was made to move it under its own power. Service was started and the traction engine did surprisingly well once it had passed the coastal sand belt, but eventually the desert was stronger, and it blew a tube which could not be replaced. Later the people of Namibia called it "The Martin Luther", after his famous quote "Here I stand and I cannot do otherwise."

Today, the first steam traction engine to operate in Namibia has been restored and declared a national monument.

It does not come as a surprise that an 18xx game situated in Namibia includes the Martin Luther as the very first "private company" available for purchase. What is a surprise though is the fact that the Martin Luther is the only private company available in the game. Its sole purpose is to act as a tie-breaker in case no player is willing to buy stock or obligations as the owner of the Martin Luther cashes in 5 Marks dividends at the beginning of each operation round (throughout this article it is assumed that readers are familiar with the 18xx game concepts; readers not familiar with the basics of the 18xx series should have a look at our 18xx section).

Once the Martin Luther has found its owner obligations became available for purchase via auctioning. Obligations are a new element to 18xx and constitute a players obligation to connect two cities with railway tracks. The player who successfully bid on an obligation, receives one free 10% share certificate of the corresponding corporation. At the time of auctioning these share certificates have no value and cannot be sold. They only become dividend paying shares once the track between the two cities has been build. 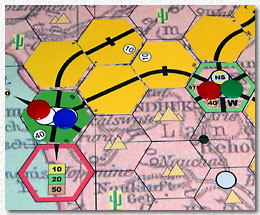 This happens irrespective of the fact which corporation laid the final connection between the two cities. Another benefit the owner of an obligation gets is the option to buy the president's certificate of the corresponding corporation once it is available for purchase. This option may even be executed if the certificate becomes available during the turn of another player. In this case, if the player owning the obligation wants to buy the president's certificate s/he may do so immediately and out of sequence provided s/he holds sufficient money in hand - no shares may be sold to raise money at this point.

There is a rough correlation between initial price of an obligation and the length of the route to be built but it turns out to be a rather tough decision of how much, if anything, one bids for an obligation. In our game we had the situation that I was "forced" by Walter to execute the purchase option at an extremely bad moment. I was short on cash at the time and had to set the initial price for the corporation in question to the lowest possible value. This combined with the following purchase "war" to keep the presidency forced me to sell some of my much more valuable stock.

Günther, on the other hand, purchased an obligation but chose to not buy the corresponding presidency. Unfortunately, the corporation's target route for activating the obligation's free share was the longest route on the map: right into the Caprivi Strip to the eastern-most end of Namibia. The consequence of this was that Walter as the president of the corporation had no intention to build the awkward track while Günther was left for a long time with an inactive share counting towards his certificate limit.

Obligations need not be bought to continue the game. If all players pass on a single obligation the obligation is removed from the game and the next obligation comes up for auction. If the last obligation is gone corporation shares become available.

The five corporations also come up for sale in a predefined order. The buyer of the president's (20%) share sets the price for a 10% share.

There is only one share price and no distinction between initial offering price and bank pool price, a rule we liked already much in 1951 and which we adopted for 1830 (see our Walter variant). Once 60% of the shares of a corporation are sold, including the still inactive share coming with a sold obligation, the corporation floats. All remaining shares are then transferred to the treasury of the corporation together with 5 times the initial share price (6 times the share price if the obligation has not been sold). Any subsequent shares bought from the corporation's treasury cost the current price indicated on the stock market chart and the money is paid to the corporation.

There is one aspect during the stock market round which was new to us and we found an excellent idea: a player is allowed to own up to 100% of the shares of a corporation. However, for any share bought in excess of 60% a player must pay a 20% commission to the bank and the certificate limit for each player is set 13 so that never all shares can be sold out. This puts players in the position to completely control a corporation and not being dependent on robber baron style players and their stock market manipulations. In our game this was used by Walter to his advantage when he decided to disinvest in all of my shares and instead investing in 100% of the shares of one of his two corporations. Unfortunately for him, in mid-game he overlooked the threat of his route being devastated by a cleverly placed token of another corporation with the consequence that dividend payments were severely impacted for a while. Overall, we found the concept of being able to buy ALL shares of a corporation for a 20% premium to be a perfect enhancement of the game system.

This leads us to the operation rounds. By deliberately providing only a limited supply of brown tiles and the fact that as soon as they become available corporations may build two yellow tiles per operation round instead of one the duration of the endgame is significantly shortened. A fact we liked a lot as it prevents those tedious waiting times when one player is trying to still find a worthwhile extention of his routes. Also the well-balanced overall supply of money in the bank supports this concept.

Trains come in the H-variant, traveling their designated number of mid-hex distances rather than a given number of stations. There are 8 different trains available, starting with the tiny 2H up to the giant 16H, which can cover nearly any north-south route of the map. Supply of trains is very limited, though. All but the 2H (4) and 3H (3) trains types have only 2 trains, except for the 16H, which has an endless supply. Scrapping of obsolete trains occurs whenever a train with twice the size is first bought, i.e. 8H trains scrap 4H trains and results in 10H, 12H and 16H trains being saved from scrapping. Even with our empire building style of game play this led to a very dynamic mid-game in terms of train acquisition; sometimes making it difficult to get at least one run out of a newly purchased train. The amount of dynamics in train acquisition and operation is something we have not seen before in an 18xx game and which definitely is another highlight of 1895.


WORKING IN A COALMINE

Another new feature is the two mines on the map, one coal mine and one diamond mine. If connected to a route a corporation collects additional income when using that route. Different to the normal income of a corporation the mine income may not be used for dividends but is paid into the corporation's treasury straight away. We found this to be a very welcomed extra income for a corporation virtually at no extra cost other than using a route along a mine field.


AND IN THE END

In the end Günther won the game by a small margin. This is remarkable in so far as Günther was the player with only one presidency and who had the additional handicap of a reduced certificate limit due to the blocked share, which came with the obligation. Walter and I both owned two presidencies, Walter owning 100% and 50% of his corporations and I owning 80% and 60% of my corporations. In retrospect the forced floating of my second corporation at a very low share price only to keep the benefits of the obligation was definitely a mistake and probably cost me the game.

1895 is a 3-player game, designed to last 2 hours or less if played without a moderator program (the configuration file for Lemmi's 18xx moderator program is already available on Adam's homepage). As with most 18xx games the designer took care to reflect the historical development of the railway system in the respective country with some accuracy. Four of the five railroad corporations in the game are real railroad companies of that period. Most likely, trackbuilding also follows historical routes due to the obligation's target cities and the cleverly placed fields with extra costs (terrain) or benefits (mines).

The idea to design a short 3-player variant of an 18xx game has been implemented very well indeed. 1895 is highly dynamic both in the bank round, due to the low certificate limit as well as in the operation rounds, due to the limited supply of trains of a single type. The concept of obligations works very well and provides an extra dimension to the game which we found challenging both in determining the right price for them as well as using their benefits to a player's best advantage. Comined with the excellent production quality of the game (map, tiles, certificates and trains are laminated) makes 1895 a highly recommended game. Walter gave it a ranking of 10 (out of 10), which puts 1895 in line with his much liked 1830. For me 1895 is a excellent addition to the 18xx series, especially due to the fact that it is a short, 3-player game and still has a lot of dynamics and challenges. But the "suspense factor" of 1830 is still my favorite; hence my ranking is 9 out of 10.

Our thanks go to Adam Romoth (designer) and Helmut Ohley (co-designer and producer) for making it possible to play "1895 - Namibia" a few months before the scheduled re-release date in October, in time for "Spiel 2004" in Essen. The improvements made to the inital design released in 2002 are considerable and resulted in an overall enhancement of the game.

Details about the games availability can be found here soon.