The "master" (Martin Wallace) has struck again - fresh from Essen we played his new labour of love, the ambitious "Struggle Of Empires". In this game, Wallace tries to meld some ideas from his earlier games and form a larger whole, and he is, to keep it short, mostly successful.

"Struggle Of Empires" is a simulation of the Victorian Age, an age of conquest and increasing European domination of the planet. The players play the Empires of Britain, Prussia, Spain etc. and battle it out for world domination (=VP). The relatively small board (for the amount of counters) depicts literally the whole world: We find Europe and the "Colonies", Africa, the Americas, East Indies... all divided into a relatively small number of "areas". The game is played in three "wars", consisting of up to six player "phases" which consist of up to two actions. At the beginning of each "war" (and they are rightfully called like that, because players will find it necessary to use their military force to win the game) 10 country counters are drawn, which represent "opportunities" in the different areas. Some of them can be won over by war (which involves dice rolling and the elimination of the counter, to be replaced by a "control token"), some can be won by other means (the "slave" counter can be exchanged into a control token if the player has a fleet in Africa, for example). Control tokens can in turn be attacked by other players, which will certainly happen after opportunities become sparse at the end of the a "war".

The heart of the game is the ingenious "alliance" system, which bases alliances on a bidding mechanic at the beginning of each round. Basically, two "sides" are determined, and you can never attack your ally once these sides are determined. In the first "war" these alliances are of less importance than at the end of the game, where it really helps to be on the same side as your worst enemy/competitor. However, you will have to pay for being on his side!

The simple system works nicely as an anti-kingmaker mechanism. A clever player can make it virtually impossible to suffer from "bash-the-leader" attacks in the endgame, but at the same time he has to weigh the amount of cash he spends for this privilege. Players can take unlimited cash, but they pay for it (and for the loss of armies) with "Unrest" markers, which can only be lost by expending extra actions. In addition, a certain number of "unrest" makes you lose the game in the end, and the players with the highest unrest at the end will suffer VP penalties. 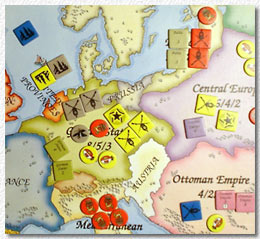 The "meat" of the game is the "upgrade tiles", though. If you thought "Princes of the Renaissance" was daunting in this respect, the possibilities (and number of different upgrades) will overwhelm you in this game. Even our dauntless group went very silent in our first game, while we desperately studied various playing aids with tiny writing. Everybody felt that one would try out different combos in the next game, which is a good sign.

At the end of each "war" victory points are awarded for majorities in areas in typical Wallace fashion (if both players have the same number of control tokens, each gets the full amount of VP). After three "wars" the game ends.

The Warfrog rulebook is - as always - an eternal mystery. While you read the only 2-4 pages the rules usually have you think "hey, this is not too complex", but when you get to actually play the game one is always surprised at the sudden complexities and abstract handling of certain aspects. Wallace tends to be a minimalist in his rules - there is not one superfluous sentence in any of the rules - each sentence states something very essential to the game, so that you often overlook the details. Whereas "Euro" rules tend to be very verbose and filled with examples recently, even if the rules are simple, Wallace takes exactly the opposite approach.

His games are also always full of unique mechanics, which often need a bit of getting used to while usually making a lot of sense. But also here the Wallace fan (and I would count myself as being one) recognizes certain elements, like the VP distribution.

The final question is if there is enough novelty here to demand a buy. I personally find the not-too-recent "Princes of the Renaissance" more to my taste, but one would be hard-pressed not to admit that "Struggle of Empires" is an excellent game in its own right. It is one of Wallace's more aggressive and bleaker games, which has to do with the theme. Interestingly there has been no attempt to avoid certain issues like the depiction of slavery for the sake of political correctness. The cover even has a naked, sad-looking black slave on it - will it be published like this in the US, I wonder? I can already see the discussions at "boardgamegeek" shift from the silly anger about the brown colour of the population markers in "Puerto Rico" to discussions about this game. Hey, it was even supposed to be called "Birth of a Nation" once!

There is no question that players of this game have to play "evil" to win - just like their historical counterparts, they exploit the world for their own devious means, and the game has no intention to hide this sad historical fact about the history of Europe.

If you can get along with that, you will be in for an intense gaming experience. However, do not complain if you are backstabbed - it will happen!