Actually, the title (nose picking) refers to an activity in connection with the human nose and already in Essen at "Spiel 2004" visitors expressed a certain surprise of bad taste when passing the game tables where this game was played. I, too, do not find the title of particularly good taste. If you don't mind I will use the verb "screw" instead from now on, because in my generation this word has a very kind, harmless sound. Why not! In the centre of the game table lie five cards with noses (we'll stick to the name of our smell organ, here!). The cards lie apart far enough that an other card can be placed on either of the four of the nose. To the eastern side of each nose card a "booger" from a draw pile is placed. It shows victory points, which players try to achieve.

Each player possesses five finger cards from the types north, south and west, which he may place on the respective sides of the nose card. But only if there is a vacant space, competitors may not be removed (unless they are of lesser value). Each player must place at least one finger and can place a maximum of all five fingers during his turn. Once a nose has been completed it has an exactly defined "conquest value", calculated by using the finger and booger cards next to it.

Subsequently, the dice are rolled. If you roll less than the conquest value, you may take the booger and additionally remove one finger card. A new booger is placed on the free space, the hand cards are filled up to five, and the screwing continues.

There are a few special cards, which allow a player to affect the conquest value of the nose to his favour. The general sequence of play remains however unaffected: 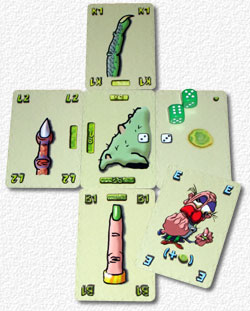 That's already a lot, or isn't it? It sure is enough to receive two and a half points from the Westpark.

Small formal improvements and three WPG points would have been possible!