This game is not, as one would expect from the title, about beds, but rather about BETS (apparently real-life Casanova's second obsession).

This is a deceivingly simple game, that actually turns the intrepid gamer a little off when he reads the rules, as there doesn't seem to be much of a game in it. 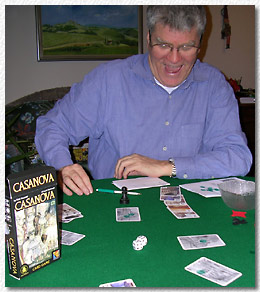 Each player has 13 cards (numbered 1-13). Each round consists of the starting player declaring if he is going to roll 1, 2 or 3 dice, then each player selects one of his cards secretly. Then the dice are rolled, and each player places one coin as a bet. The starting player now has the possibility to either "declare" and reveal all cards (in this case the player who played the highest card that is either equal to or below the actual dice roll wins the bet) or to "raise", which works like in poker, with each player either passing or raising. This is done 12 times, and then the game ends.

Strangely enough, the game is much more tactical as the first impression suggests. The fact that you only play 12 of your 13 cards, and that the cards the players already played are open creates some second-guessing, and can even result in "sure" bets, if the dice do not roll too far from the average outcome. But even though this results in slightly amusing little game this is not more than VERY slight fare for the family crowd, even if the cards' graphics are nice and unusually elaborate. I wonder if beds wouldn't have been a better theme, and if some players felt cheated after buying this game because of the promising title.