It's the 1920's and Australia's economy is still booming. The government vigorously pursues industrial development and at the same time encourages the development of national parks to support the environment. This is the setting for Wolgang Kramer's and Michael Kiesling's latest game.

The map shows the six mainland territories of Australia split into 24 land and water regions. It is the players task to complete industrialization and conservation projects in these regions and to place rangers into camps or on ships located on the regions' borders. The number of rangers a player has depends on the number of players in the game, ranging from ten in a five-player game to 20 with only two players. Small plastic double-decker airplanes fly the rangers into the region and pick them up again when their task is finished.

During a turn, a player performs two actions out of a possible three. One possible action is to fly his plane to any of the regions in preparation for unloading or withdrawal of rangers. Another action is to unload up to four own rangers into one of the camps or onto a ship of this region. In order to do so the player must play a region card from his hand. Each card shows the colour of the region it can be played for, the number of rangers one may place (one to four) and the money one earns (three to zero dollars) for doing so. The hand card limit is two, which may sound rather limiting, but in fact each camp is adjacent to at least two and many are bordering three or more regions so that there is only a slight reduction of choices by unlucky card draws. If all fails and you do not have the right colour in your hand you may even change the colour of a card by paying money. The third type of action is to remove up to four own rangers from any of the camps bordering the region where your plane resides.

Players may spend money during their turn to either change the colour of a card they play (3 dollars), or to move one of their rangers from any camp or ship to any other valid location (4 dollars), in addition to the other two actions performed. According to the German rules, the latter option is allowed just once per turn, while the English rules' wording suggests that it may be performed repeatedly in a turn. Wolfgang Kramer is said to support the English version while Ravensburger is quoted to support the German one. We followed the English rule version because it leaves you slightly more options in case of a required major reshuffling of rangers due to early bad planning.

At the end of a turn, players draw new region cards to fill up their hand to two with players having a choice from which of the four stacks they draw, the back of the cards showing the distribution of money vs. rangers.

The completion of industrialization and conservation projects triggers the distribution of victory points. Whenever a plane arrives in an area for the first time, the industrialization marker of the region is turned over, showing how many rangers must be present in camps located around that region to complete the project. As soon as this condition is fulfilled the active player scores three points for completing the project and all players score one point for each of their rangers in camps bordering the region or two points for rangers on ships. Conservation projects on the other hand are completed once all camps and ships of a region are occupied. Scoring is the same as for industrialization projects.

Although Australia comes along with only a small set of rules and is explained quickly, playing the game well is a completely different matter. Placement of airplanes and rangers is tactical and there is not much point in trying to develop regions all by yourself, because you will quickly run out of rangers to deploy. It's better to predict where projects may complete soon and to try and participate in the scoring.

The number of actions you are allowed to perform is always less than you would like, so planning ahead is essential; the placement of the airplane being of particular importance in order to not having to move it in every turn. Hence, playing the game in a group of brooders and optimizers can result in long downtimes. My experience is that this doesn't really matter because there is a lot of suspense even when it's not your turn as you constantly try to determine the other players' plans while at the same time hoping that they won't recognize yours.

During the first few rounds players set up what is deemed to be good strategic positions. Completed projects in this phase can result in some players running away on the score track. However, it is almost impossible for the early leader to maintain his position, not because there is ample possibility to gang up on the leader - in fact there is none - but because an early lead often results from a concentration of a player's rangers in just a few regions. Consequently, that player needs too many actions later in the game to transfer his rangers to other, still scoring locations. 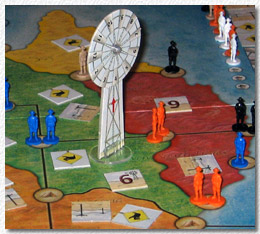 Once the board gets filled up with rangers there is a steady increase of suspense when many regions will be close to completing their projects and placing just a single ranger may trigger multiple scorings. Now special attention is required not to overlook scoring regions because other players are not required to point out any missed ones. They may even score the region in their own turn collecting the three bonus points for completing the project! This sounds obvious but I have yet to see a game of "Australia" without at least one such missed scoring.

The game comes with two rule variants: the familiarization game as explained above and the full game. The full game adds a little windmill, which is put in an arbitrary region at the beginning of the game. It provides an option to place rangers on a ranger track in addition to the camps and ships if the player's airplane is in or adjacent to the region where the windmill stands. Whenever a project is completed its associated marker is placed on a windmill track. If an industrialization project marker shows a windmill upon discovery, the windmill is immediately moved to that region and the point value of the windmill is increased. Each time the last position of the windmill track is filled with a marker the windmill scores by giving points to the three players with the most rangers on the ranger track. Then the markers on the windmill track are removed and the top half of the rangers on the track are returned to their players. The windmill feels like a rather pasted on theme and game mechanism. It does provide additional food for thought, though and it is certainly suitable for more mature gamers, but it also bears the risk of increased downtime between turns. We had mixed feeling about the windmill versions for some other reasons. It provides an additional option for placing rangers, which comes in handy if you do not want to place all rangers in a camp because you want to complete a project there while the card allows you to place more rangers than you want to. The chances you can do so are rather limited though, as you have to be close to the windmill in the first place and secondly you must have sufficient rangers to place. Especially later in the game the latter will be a problem. On the other hand, the windmill scoring is very hard to predict in advance and we found planning ahead for this to be near impossible.

Australia plays equally well with two, three or more players; three being in my opinion the best number of players. With five players, I would recommend not to use the windmill variant, as there is not enough possibility to plan ahead for it to make much sense while increasing the downtime considerably.

It has been a while that I have played a Ravensburger game that provides fun for the casual player as well as sufficient challenges for experienced gaming groups. If you like abstract games with only a lightly pasted on theme and if you don't mind if there is little interaction between players Australia is the right game for you.

(An earlier version of this article has been published in "Games International", issue #21)