Out of the blue (or out of a sunny river, one might say) comes a very enjoyable card game that probably also rides on the wave of the recent poker revival, but is so much more….

As any poker player will attest, poker is very often battle-like in structure. Like Zhukov or Patton or Wallenstein you let the enemy in doubt about your actual strength, and when it's time to strike you reveal your full power. Some give up before it comes to this moment, and some bluff their way to victory and some win with a simple pair, comparable to the victory of the 300 Spartans.

The Hundred Years War is the perfect setting for a battle-like poker game, as it was a time of constant upheaval, short periods of peace followed by another outbreak of violence. A series of battles is played to complete a full game of "Havoc"; each battle gives different amounts of victory points to the victor and the players on 2nd or 3rd or even 4th place, while giving additional benefits to the player who actually started the war (usually drawing more cards than anybody else). The player cards are numbered 1-18 (when playing with less players the number of cards will be reduced) and come in different colours and with beautiful illustrations taken from original art from the time period of the game.

After the "peacekeeper" (or starting player) is determined by an ingenious device, a rotating finger that soon will be geek item no.1, players take turns either taking cards from the pile (a selection of open and face-down cards) or declaring "havoc" and starting a poker battle round. The problem is that the longer peace endures the more the peacekeeper will profit from it, as he will keep his cards after two

full turns, whereas the other players have to discard one of their cards in hand. The battle card will then be discarded (if there's peace there is no battle, obviously). But this happens rarely, more likely the cry of "havoc" is heard at some point and the game of poker begins. Each player now has to place two of his cards on the table or pass, if s/he passes, s/he can take two cards but is out of the round. If you stay in the game you have to play another card in front of you (up to a maximum of 6) or fold. All cards played are lost… usually, but there are also "dogs of war" cards, which prove to be very useful. They can either retrieve cards played in a battle (up to a maximum of 2) or be part of a winning hand (number 0). They also help when drawing cards - two dogs can be exchanged for any card in the discard pile, and one dog can be exchanged for any open card. 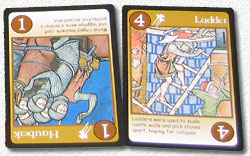 The rank of a played hand follows standard poker rules with 6 cards, first come pairs, then simple flushes, then triples etc., up to a 6 card straight flush, the best combo. Although 6 cards are the limit that one can play in a battle, additional dogs of war can be played to increase the number of cards up to 8, theoretically.

After the battle the victors get the spoils of war and a new round begins, with the winner of the battle becoming the new peacekeeper. The final battle is a special affair, as it begins directly after the last battle, with only limited ways to improve your hand. Not surprisingly the final battle gives the most VP's as well…

In this excellent card game players are not playing a simple poker game, they play three poker games at once. For a start it is not always a good idea to participate in every battle or to give your best when doing so. You always have to consider how your hand will look AFTER you play the battle, not only winning the battle itself. This means that your hand (which is unlimited in number of cards) is in constant flux: it is a result of former battles fought, of what is involved in a present battle and what you will have to save for future battles. This makes for interesting decisions, even sometimes resulting in very weakly fought battles as every player holds back his best cards. But if you fight too weakly somebody will win the day with a meagre pair, so you constantly have to look out for the hand management of other players. If you have played 3 cards from a 5 card set should you actually play the other two cards as well to win safely (if you can) or should you instead play two dogs to retrieve at least two of them at the end of the battle and prepare a 4 card set for next round, but then perhaps giving another player the ultimate victory? The victory points "schedule" of battles will also influence your decision - if only the first place gets points you probably have to either fold immediately or give all, but if there are several tiers of victory you might have to try to always be involved with at least a pair for some easy VPs. As often card draws will be from the row of open cards you will also be able to outguess other players' plans, also something missing from "normal" poker.

Whatever your tastes in card games are, you will find "Havoc" to be a challenging and clever game on its own that you will want to play again and again. There is even an in-game expansion that adds more options and abilities to cards, if you ever should get bored or want to try out something new.

In my opinion "Havoc" was one of the best new card games of Essen 2005, and can wholeheartedly be recommended to anyone, even if they HATE poker (like me).