Martin Wallace does not disappoint with his newest game, the unusual wargame "Byzantium", which was presented at Spiel 2005 by his "own" publishing house, "Warfrog". In fact "Byzantium" might be one of his best games yet.

"The Year is 632 A.D. …" begins the rulebook, and we, as players, find ourselves in a time when the Byzantine Empire, descended from the glory that was the Roman Empire, face a new enemy in the growing Arabian empire.

The map shows a simplified area of the Middle East. At the beginning the Byzantine Empire dominates all; only Tabuk, Medina and Mecca are Arabic. In the east there are some "neutral" Persian cities which will soon fall under both Arabic and Byzantine invasions. In the north the Bulgars threaten the heart of the empire, Constantinople.

One might think that this is a wargame in the classical sense, one player playing the Byzantines, one the Arabs, and so on, but in fact the most unusual feature of the game is that ALL the players play the Byzantines AND the Arabs (and the Bulgars) at the same time, and they have to play them all well to be successful.

To make this work Wallace uses a solid rule system that has many "Euro"-characteristics. Players have one action each round. Moving and attacking is always unlimited (as long as you have cubes as resources), but many actions are special, and can only be done a couple of times per turn, so they are marked with a cube as "used". One could compare this to "roles" common in games like "Puerto Rico", and the turn order will play a large role in who will get the most interesting choices first. Players spend cubes for practically every action, so at some point they will run out of cubes and the turn grinds down to a halt. Whoever passes first is first in the next turn, of which there are only a maximum of three in the entire game.

When you do something as "The Arabs" you will mark your VP's on the "Arab" track, if you do something as the "Byzantines" you mark them on the "Byzantine" track. You always have to strive for a balance of points, as when you earn more than double the amount of the other VP score, the lesser one does not count. This automatically makes for an "equalizing" mechanic in which no side never really dominates, because you have to switch back and forth. 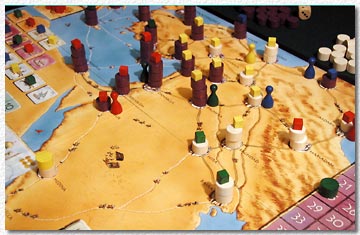 Typically for Wallace's games dice DO play a role, but as all players can profit from the successes of either major side, the game is not dominated by luck as some other wargames.

Each player owns a tableau on which he openly deploys both Arabic and Byzantine forces. The first space is reserved for elite troops, the second for normal troops, the third for militia and the 4th for movement. Wooden cubes in each of these spaces show the strength of each "trait". The players can bring in new cubes from the (limited) reserve onto the tableau as an action, but once they're there moving them costs money. It is of little surprise that also the treasuries of each empire are kept separate. Moving a cube on the tableau is paid by the faction that profits from the movement (for example weakening the Arab elite troops by moving a cube from there to the Byzantine militia helps the Byzantines, so they have to pay for it).

Each player moves up to two armies on the board, which he calls his own, one Arabic and one Byzantine army. The "Bulgars", in essence "Barbarians from the North", can be moved a total of two times per turn, by whoever chooses their action space. When the Bulgar's attack the side NOT being attacked gains the points they make.

There are three sizes of cities, one, two or three wooden disks high, which equals the victory points they bring when you own them at the end of the game. Once a player has placed a cube on a city, he "owns" it and his militia on the tableau is responsible for defending it in case there is no "real army" present. Alternatively the army present can always decide to retreat before a combat, an action which probably doesn't make the always inferior militia very happy, we can assume. 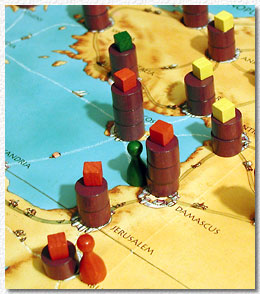 Obviously Arabic armies only attack Byzantine cities and vice versa, but once or twice per turn players can choose the "civil war" as a special action and attack their friends. Combat is simple - each army gets as many dice as they have "normal" troops/cubes, up to a maximum of 3. Elite cubes can add one dice each ad libitum, but they also cost more upkeep at the end of a round. A 6 is a hit, both sides roll at the same time. Whoever has the larger army present after this process wins and the losing army retreats. After that there is a siege roll, one dice for each city disk, each 6 destroys another army. If you then still have more cubes of your army than the number of city disks, you can proudly walk it's streets as a conqueror. Spoils of war include money and VP equal to the new size of the city, which is obviously one disk less as it was razed by you.

Cities can also be fortified or "grown" (up to three disks) via an action; other interesting one-time actions are gaining temporary control of either the Arab or Byzantine elite troops. Arabs and Byzantines have slightly different movement rules regarding sea travel (the Byzantines are better), and the use of captains can shift this balance, but I have yet to see a game where this option is actually used. There are two more options each round, one is exchanging cubes for money, the other is erecting mosques and temples for VP's (costs 6 money).

When the turn ends, each player has to pay hefty support for his troops, which can end in tears if the money doesn't cut it, so players tend to completely destroy their armies in order to reduce the cost, as at the end of the turn half of your destroyed cubes are regenerated for free. But this is not always a good tactic, especially if you want to defend….

After three turns the game ends and an alternative end occurs when Constantinople (a 5 disk city) falls to either the Bulgars or the Arabs. As the Bulgars start out pretty close to Constantinople they can be used as a constant threat to end the game, in fact all games I played ended with a Bulgar conquest of Constantinople by the player leading in VP's.

"Byzantium" is a tense and challenging game with an ever changing board situation. Where you place your armies plays a huge role, as movement is expensive (it costs cubes) and you don't want to get stuck in a "dead" corner of the board with nothing interesting to attack. As attacking is practically the only way to get money, there will be a lot of exciting battles, and they will also usually be fair battles, as retreat is practically always an option. And even if a player loses one of his armies he is far from losing the game, AND he can always construct a new army. In the end its VP's that count and they are gained through conquests on the board, but not necessarily lasting conquests.

As in any good Euro game the road to victory is not obvious, and many strategies are valid. The miser could go for VP's through temples, spending little money for his army instead. The conqueror fights as many battles as possible, with little regard for defending "his" cities. The hoarder concentrates on defending a few valuable key cities. All these strategies are valid and can be successful, depending on the actions of the other players. As actions are limited rounds are fast and exciting, and no player ever gets into a situation where he can't do anything worthwhile (apart of running out of resource cubes).

I enjoyed "Byzantium" immensely - it is one of the more accessible "heavy" games by Martin Wallace, and can be taught reasonably quickly (and played quickly as well). It is less unforgiving than the equally excellent "Age of Steam", so it might draw some new Wallace converts. I am already a big fan of his games, and this is certainly one of his most interesting efforts to date.