Buying a game just because of the publisher's name stands for quality can be risky and the cause of disappointment. When I heard of Ystari's latest game "Mykerinos" I nevertheless did just that, for the simple reason that this publisher's games have been quite liked by our gaming group.

The box contains a rather small game board, lots of tokens and tiles and a total of 100 wooden cubes in the four player colours - all of which in high quality. The rule book leaves one startled at first look as is virtually impossible to read the text due to the strong background picture of Egyptian hieroglyphs. In my despair I had a look at the Ystari website and found a pdf version of the rules, ready for printing. If printed in monochrome the background picture becomes faint enough to make the rules easily readable.

The rulebook leaves nothing to be desired in terms of clarity and structure. The rules are simple and short enough to be explained quickly, but you have to make sure that the rule regarding start player selection is well understood by all players - more about that later.

Players represent archaeologists faced with the task to send men (wooden cubes) to promising excavation sites to search for artefacts and to rooms in a museum to present them. Valuable excavation sites yield victory points and sponsor support and occupied rooms in the museum act as multiplier for these VPs at the end of the game. 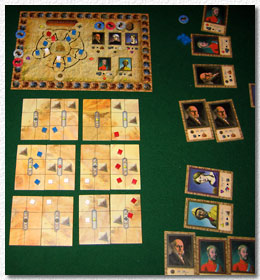 The game is played in four rounds. Each round starts with collecting a defined number of men (player coloured cubes) from the general stock and putting them into the players' personal stock. Next an excavation site is constructed out of "parcel" tiles, using two to make an area. Four (six in the last round) areas are then making up the whole site. Each parcel has six spaces, some blocked with pyramids, on which men can be placed. Placement of men is done in turns with players being able to place up to three men per turn, depending on their position on the site and the possible support of sponsors. Once all players have passed, the evaluation phase begins where the excavation site is checked for majorities in each area. Starting with the player holding the majority up to three players may now choose to take one of the area's parcels, yielding victory points and/or sponsor support or to place a man into a room in the museum. Once all areas have been evaluated the next round begins.

The game leaves players with a number of subtle choices of tactics and strategy. Since the number of men per round is limited, their optimal placement on the excavation site is vital for winning the game. It is usually not advantageous (or even possible) to try and be present in all areas. From round two onwards it is also important to place men into the museum instead of taking parcels with sponsor support as only the right "mix" of parcels and parcel multipliers (rooms of the museum) will yield the most victory points. Here, the sponsor "Sir Brown" appears to be very powerful as he provides the ability to place men in the museum already during the excavation phase. Also "Lady Violet", who provides the ability to take extra men from the general stock in addition to an excavation turn, is a much sought sponsor. 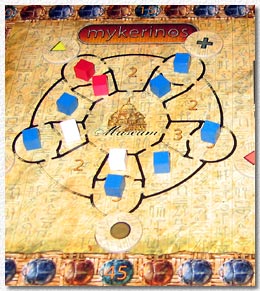 After our first game we had a long dispute about the rule determining the start player of the next round. It says that the player passing LAST in the round will be the new start player. At first glance this sounds rather counter-intuitive. Passing last means you could have one more turn during the excavation phase, or at least you were the one placing the last men, thereby having had a chance to shift majorities in your favour. However, we could not agree if being start player is of an advantage or not. Being first in a round one usually has the best choice of excavation spaces but on the other hand one is almost certain to pass first, too, due to the depletion of men. Saving men for the next round most often does not make a great deal of sense as the last player is only allowed one more turn after all other players have passed.

We found the game to be challenging enough to be fun but by far not as challenging as the other two Ystari games. It has all the good attributes of a fine game, like always being in the situation of wanting to do more than the game currently allows and the requirement for some clever resource balancing. The different sponsors provide the material for defining and following a strategy while the placement of men fulfils the needs of tactic lovers.

A final word on the number of players. The two-player game appears to be a compromise by introducing a neutral player, something I personally don't like and rarely have seen to work satisfactorily. The four-player game has fewer men per player per round than the three-player game, making the optimal placement of men on the excavation site or the museum much more important. At the same time it is almost impossible to predict the placement of men of three other players, so the 4-player game is less strategic. I prefer the 3-player version with just the right amount of freedom and predictability to be sufficiently deterministic and strategic.