The title's English translation would be "Millions of Dives", "dives" in this context meaning a pretended foul where a soccer player falls in the area close to the enemy goal to provoke a penalty or a punishment for the defending player. If any team has made an art of this, it's the championship winning Italian team, but I digress.

"Millionen von Schwalben" is an unusual game as it enables players to actually play through a complete European or even World Championship. It is also unusual that the cover of the game box is so far removed from any soccer theme that it will be quite difficult to actually understand what this game is about (the birds on the picture are swallows, the German slang-term for a "dive" in football, and one penguin!).

Each player manages a number of teams dependent on the total number of players and the number of participating teams. Although you can earn money by having your team advance to the finals you make more money by betting on teams.

At the beginning each player gets 100 VP that can be used to secretly bet on your own or other teams. The number of VPs you must bet depends on the strength of the team, so for example any bet on the Portuguese team costs 11 VP. If Portugal advances to the quarter finals you earn 16 VP, if it advances to the finals you earn 36 VP, if it wins the championship you earn 56 VP. As one can see the win/lose margin is very close, and if you bet on too many teams you will certainly not win the game.

After the secret bets are placed, all championship games are played in a set order, just like in real life. For each game the players manage the teams they own, and a third player becomes the referee for this game. It is by the way perfectly possible to have your own teams play against each other! 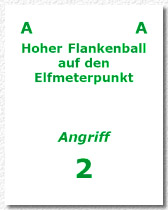 Each team has a number of blue, green and red cards dealt at the beginning of the game. The exact number depends on the strength of the team, not all teams are made equal. The Austrian team has very few cards, whereas the Italian team has a lot of cards, to give an example.

Red cards are special ability cards. These are the only cards that can regenerate throughout the game, and they can offer extremely strong special moves that certain teams are famous for.

A match starts with the declared home team drawing a random additional card from a stack that contains all three colours of cards. The other team will now play its the first offensive move, which may or may not be countered by a defensive move of the other team. Then the home team will make its offensive move if it wishes followed by a possible defensive move of the other team again, and so on until both teams pass or run out of cards. As cards are NOT regenerated during a match or even after the match it is very wise to not constantly play all your available cards, you have to save them up for the future.

All cards use the same mechanic - to be successful you have to have a result of 7 or higher when you combine the number on the card with a die roll. This can become confusing as there are some cards where you DON'T want to succeed, for example fouls are good if they remain undiscovered by the referee as they stop the other player's attack, offsides again want to be discovered. There are also many special cards and combos. It took us a while to get used to this system in the first game, although it is far from being complicated. 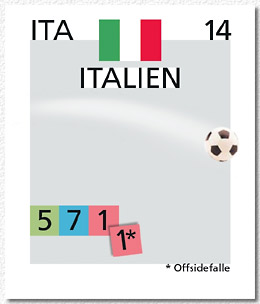 The referee plays an interesting role, as he can fudge the die roll for fouls and offsides. He can also decide if a foul discovered at the border of the penalty zone actually results in a penalty or not. Therefore it might be wise to bribe the referee - if he accepts your bribe before the game he always has to decide positively for you. I would love to say that this feature of the game is unrealistic, but if I look at the recent scandals in various soccer leagues I have to say that it is the MOST realistic feature of the game.

So you will never see any scores like 4:1 or 0:3 which of course happen in real life.

The game gets the most interesting when you try to work out which teams the other players support. There will be weird matches where strong teams suddenly decide to not attack at all to make the other team win. Otherwise there is a lot of downtime if you are neither the referee nor a participating player, as some matches can drag along nicely.

This is an unusually long Euro game - expect a Euro-championship to last at least 2-3 hours (without rules explanations), and a world championship to last twice as long. With 6 players or more some matches could be done simultaneously in theory, but this rarely makes sense.

Will you like the game? That depends strongly on two factors: you MUST be a soccer fan to appreciate some of the special moves and to understand what's actually going on in a match. And you MUST speak German at least well enough to get by or get a translation from somewhere. As the game author is Swiss the game uses the Swiss soccer terms, which are closer to the English one's than the German terms. So you might just get by with only a little German. Apart from that the presentation is rather drab and boring - neither the card design nor the pictures are very interesting, in fact there are no pictures at all on the cards, for example. Even more problematic is the fact that there is no way to keep track of the championship on a game board, everything has to be written down on a form, which is rather uninspiring. But underneath there is a game that you might like, even though it is far from being a realistic simulation. Millions of flies, eh swallows, should rather look elsewhere…

You can find some playing aids ready for download on the "Schwalben" page of Fata Morgana.