"Yspahan" is a German-style board game produced by Ystari. This may already vouchsafe for its quality since Ystari delivered only excellent games so far. Fortunately, "Yspahan" is no exception to this rule.

As most full-blown board games, "Yspahan" is about victory points. How do you get them? Those numerous, little coloured wooden cubes and the game board, which features a city map layout, might suggest a majority mechanism like we had so often since "El Grande" times - but far from it.

The city is divided into four quarters, and those quarters again in neighbourhoods. After seven turns ("a week"), victory points are scored for every completed neighbourhood. Once you start a neighbourhood (i.e. you put the first cube into a house of a neighbourhood in a quarter), no other player is allowed to put their cubes into houses of this particular neighbourhood. So, the challenge is not to get more houses than other players, but to complete the neighbourhood before scoring takes place.

How do you get your cubes into the city? This takes us to the most interesting novelty of "Yspahan", the dice board. At the start of each turn, the starting player rolls 9 dice. He groups them according to the number they show, and accordingly, he ends up with 1-6 different groups.

First, all dice showing the lowest number are placed onto the first spot. Then, all dice showing the highest number are put onto the last spot. Those two spots represent camels and money, respectively. Within the framework of this game, think of camels just as another currency, just as useful as money. Some things are paid with camels, others with gold, a few require both.

Let's image that there were two 1s and three 6s. The first player could now choose either to take two camels, or three coins. Got the idea?

However, there are of course six different spots, and the four others represent the four quarters. Every die on such a spot means you may place one cube into the respective quarter.

Once a player chooses an action, he takes all the dice from the spot he chose. The next player must do something different. Therefore, in each turn, only one player may put cubes in any one quarter. This is exactly why it may get difficult to get your neighbourhood full before scoring day. 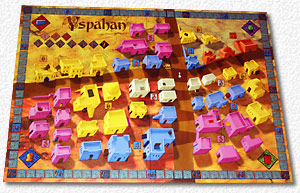 There is another, statistical challenge. Rolling six dice, one usually does not end up with every number from 1 to 6 in the result, meaning that one or more quarters will not be accessible (and those quarters are the ones, which offer the most victories points, of course). The starting player can do something about it: Play up to 3 coins, and add up to 3 dice. Those dice are only useable for him, and they often tip the scale and make all neighbourhoods available.

My review is already getting long, and I've only explained a mere third of game play. I'll try to catch up. Instead of taking the coins/camels associated with a spot, or placing the cubes, a player may always choose one of two other actions: Taking a special card (well, the usual stuff: "free camels", "change camels and coins as you like", "get victory points for coins/camels" etc.) or moving the supervisor.

The supervisor is a token you move on the game board. The cube in the house in front of which the supervisor stops gets kicked out and is put on the caravan. Sounds pretty aggressive, huh? In fact, it's not. The caravan is another game mechanism for earning victory points but it works obviously according to different rules. This means you almost always kick out your own cubes, not those of your fellow players. 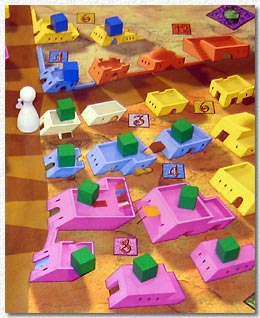 The most important strategy hint is that you need to buy those developments that match your strategy. If you want to win by neighbourhood majorities, go for "place one extra cube every time you place cubes" and "get 2 VPs more when scoring". For caravan gaming, you need "move the supervisor up to three places for free" and "get a free card every time you send a cube to the caravan".

This is, basically, the rule set of "Yspahan". It allows for carefully planning different strategies. Yet at the same time, a player whose turn it is does not have an overwhelming number of choices. Accordingly, "Yspahan" can be played with an appropriate amount of time, and even deep thinking players will not annoy their fellow players for too long while making their choices.

"Yspahan" should be as enjoyable to casual gamers as it is to real buffs. In my eyes it is one of the best games of the 2006 vintage.