This new offering by Fantasy Flight caught my eye during our last visit in the US – I’m a big fan of Arena games in the spirit of AH’s old “Circus Maximus” – unfortunately there are not many playable ones around....

“Arena Maximus” packs quite a lot in a small box: Heart of the game is a variable arena circuit built from many single tiles (curved and straight) – good idea! Each player (up to 5) gets a different chariot with variable abilities, and there is also a nicely designed deck of cards which drives the game forward. The rules are present in several languages, what is definitely missing is a good cheat sheet which explains the various symbols, but this is what boardgamegeek is made for.

The chariots are rated in potential maneuverability (=the ability to add or deduct whip cards to/from the speed pool), aggressiveness (the number of possible ram, block or attack maneuvers) and sheer durability (each chariot can take a certain amount of hits until it breaks down, but it can start again with a final “second life”).

An interesting mechanism is centered around the card hand: the maximum is always 7, but the cards in your speed pool count towards this limit. In other words: the faster you go (the more whip cards you have played), the less you can react to threats by playing cards from your hand. And there are many threats: most track tiles have some kind of danger: you need to play certain cards or you have to have a certain speed to avoid hits. In addition the track tiles are unknown until you enter the last known tile (then you see the next three), which means that the leader of the race always runs the danger of crashing. 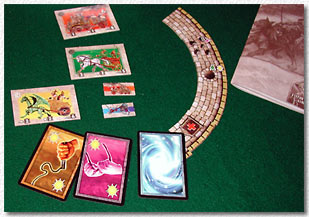 The race itself is very tight – as the last in the line and the last one to enter a tile starts the next round, the runner-ups constantly overtake the leader. When a player enters a tile with another chariot, a complex set of decision steps begins. First you have to decide if you want to ram the chariots before you (by playing sets of rein and whip cards which have to be countered). Then the chariots before you can block you (by playing rein cards, which then you have to counter). THEN you “encounter” the space (probably having to play additional cards), and THEN you can attack the other chariots with whip cards (which can then counterattack if they want and are able to). Failure to counter any card usually results in damage to your chariot.

It took us a while to learn how to go “through the motions”, and then we sometimes felt it was preventing game flow a little, although this could change with frequent playing. All in all the game did rather play like a “German” game – you watch the card hands of your opponents carefully before you maneuver in position, many decisions are not made because of the actual state of the race but rather because of your card hand. Although you never know your opponent’s exact cards, attacking someone who has just depleted all his cards to gain the lead can be perceived as a valid and unrisky tactic option. Optional “Magic” cards actually add to this impression, as they simply give you more options. A very interesting ruling occurs towards the end of the game (which plays as any chariot race should play - mean, with many nasty surprises): If a player cannot win anymore he is NOT allowed to act as a kingmaker (by playing aggressive cards against one or the other player). This simple rule is actually very elegant if you think about it. I wonder if it could be transferred to other games, for example the kingmaker-feast “Vinci”.

All in all this is a good game for the “silver” line from Fantasy Flight –The game has depth, is not overly complicated, perhaps luck-driven, but not dumb. Why a sixth player was not included may be anybody’s guess- I think for racing games the old adage “the more the merrier” is certainly true!