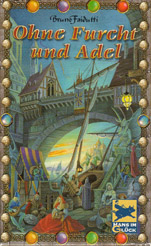 Scenario: Set in a mediaeval surrounding each player aims to build the strongest and most valuable city. A city is composed of districts of different attributes and values. Assuming the role of one of seven possible characters in the game a player performs the actions of that character to build and extend his or her city.

The Game: The game basically is a card game played using character cards and district cards. At the start of the game each player receives four district cards from the shuffled deck plus two gold coins (the coins are made of plastic, look nice and can be stacked easily). The character cards are distributed amongst the players in a similar fashion as in the game Verräter (which is actually referenced in the rules because of this): the deck of character cards is shuffled, cards are discarded in order to leave just one more character card in the deck than players in the game. The cards are then passed around for each player to select a character, starting with the current king.

Following this, the "character action round" begins. There is a fixed sequence in which the characters act: the assassin, the thief, the magician, the king, the priest, the merchant, the architect and finally the mercenary. Each character has one special ability which he can use in his turn in addition to the normal actions common to all characters. The common actions are to either take a district card by selecting one of two cards drawn from the face-down district deck or to take two gold. Then, if he wants to, the player builds a new district in his town by playing one of the district cards from his hand open in front of him and paying the amount of gold printed on this card. Districts cost between one and six gold, the costs usually reflecting the value of the district at the end of the game (there are actually two exceptions where a district at the end of the game counts 2 more than the building costs).

The special abilities of the characters add tactical opportunities as well as uncertainty to the game:

The final round of the game starts when one players has managed to have eight districts in his town at the end of his turn. The game ends once all characters have completed this round.

Playing Time: The rules are explained in less than 10 minutes, the game plays in about 60 to 150 minutes depending on the number of players. A six player game usually lasts 2 hours.

Westpark Gamers' Opinion: The rules state that the game can be played by three to seven players. Although there are sufficient cards in the game to actually do this I believe the game suffers if played with more than five players. First of all the playing time becomes way to long for a simple game like this - two to two and a half hours - if played with six or more players. Secondly, with so many players nearly all of the characters are in play most of the time. This leads to a situation where it is almost inevitable that players try to hit the current leader and are able to do so. This makes the game drag on for longer than it actually should. The final scores reflect this, too: more often than not the scores are very close with the winner being the player who just happened to get a lucky draw, scoring the four extra points for building eight districts first.

With fewer players there is a lot more planning involved in order to get the timing right for building that eighth district. Although the element of luck is somewhat higher with respect to the availability of characters this actually improves the game. Now it needs some thinking ahead to be able to get that architect character right at the moment you need it to finish the game early. I believe that four or five players is what you want to play this game with.

The character selection process is what makes the game so much fun. You can never be absolutely sure which character has been selected by a particular other player, although very often there seems to be an obvious choice for most players. But what if this obvious choice is too obvious to the player concerned and he or she deliberately chose a different one? Therefore you are faced with the problem of constantly thinking ahead of your fellow players - who are exactly doing the same...