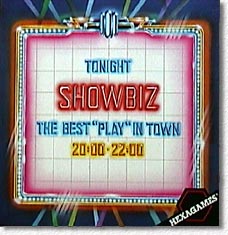 Scenario: As the title suggests: its all about show business. Each player acts as an agent who tries to get those artists under contract which marketing experts predict to meet the public's opinion. After 10 to 12 years the game is over and the player who gained the most victory points wins. 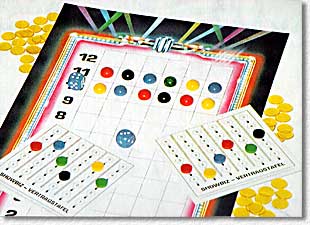 The public's opinion and the artists styles are represented by 6 different colors. At the beginning of each round 6 opinion markers each are randomly drawn for the next two years from a sack and the roll of a die determins how probable it is that the public's opinion will change at the end of the next year. So there is some possibility to plan ahead for two years. Artists, too are drawn randomly from a sack - the number of artists equalling the number of open positions for all agents (6 per agent at the start of the game). Different to the public's opinion the distribution of artists styles is not uniform - some styles are rare, others are common.

Once the appropriate number of artists has been drawn from the sack a player selects one of the artists that he wants to hire. Players then bid for this artist by secretly placing a number of chips in their hands and the player with the highest bid receiving the artist. All chips bid by all players are lost for that round. The player who received the artist now selects one of his open positions and the number of years he wants to hire this artist - an important decision since the public opinion might change and the artist becomes useless in the following years.

When all artists have their contracts the round ends by awarding victory points to the players. Depending on the number of artists in a players "portfolio" that matches the public opinion each player receives between 0 and 26 VPs. The chips used for bidding in this round are then distributed equally between all players and a die roll determines if the public opinion changes or not.

Playing Time: The game can be explained in about 10 minutes and played in about 1 to 2 hours depending on the number of players.

Similar Games: Modern Art , By Hook or by Crook

Westpark Gamer's Opinion: The mechanics of the game match very nicely the theme selected although the game is basically of an abstract nature. Although the game is heavily luck based (random drawing of opinions, artists' styles and public opinion change probabilities) one never feels "played". Each player is permanetly involved in the game and one has the overall feeling of "being in control".

The bidding for agents sometimes becomes unnerving: it will seriously harm your chances of winning the game if you are outbid by just a chip or two by another player. You paid nearly the same amount of chips as the other player but received nothing in return. There is really not a lot you can do about this besides not bidding at all because bids are made secretly. Not bidding, though, means you end up with a lot of artists in your portfolio that do not match the public opinion. Keeping track in your memory of how many chips each player has available for bidding will certainly help but is not at all easy with a higher number of players.

Showbiz is one of a few games which can be played very well with any number of players up to eight. The more players there are the more luck based the game becomes (due to the afore mentioned bidding mechanism) but the fun factor remains high, nevertheless.