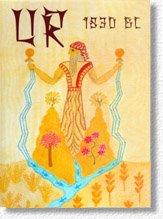 Scenario: Splotter Spellen published this limited edition (1500 copies) game by J. Doumen and J. Wiersinga for all those 18xx lovers that like the game principles of the series but may want to play a game with a theme different from railroads (do they exist?). Hence, the game is about owning land and building irrigation systems in Mesopotamia.

The Game: The game components are very nicely done. Besides the map board there are lots of tokens for indicating ownership of land and irrigation systems as well as wooden tokens for distributing the amount of water flowing along the rivers and canals. I have a minor quarrel about the state treasury cards, the equivalent of the 18xx corporate charters: it would have been very nice if these had been printed using the same colors as those used for the tokens. Instead, they are black and white with in indication of where the state is on the map board (one needs to looks at the map board to find out which state uses which token color). A nice little extra is the portraits of the game designers (and the game's illustrators) on the banknotes provided.

For all those familiar with the 18xx game system there should be no problem in understanding the rules at first reading. The game components are actually bilingual (English/German) and the game comes either with a German or an English rule book. I had a look at both rule books in Essen and they seemed to be very well translated and I can confirm this now for the German rules. 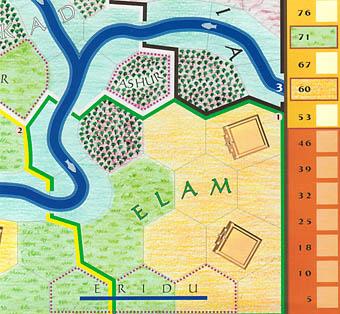 Following, I will provide a basic overview about the game by comparing the mechanics to those of 1830.

Instead of buying shares of railroad corporations player buy land areas in one of the six states in Mesopotamia. Each state has between ten and twelve such areas which actually came as a surprise to me as I expected to see ten areas per state similar to the 10% shares in the other 18xx games. Judging by a first look it seems that the states with more than 10 areas have lower value terrain. As soon as six areas of a state are sold to the players the states changes from "rising" to "founded" similar to railroad corporations being floated. The owner holding the most shares of a state is the king of the state who later on decides about the distribution of the states income.

Similar to the minors in the 18xx series players acquire so-called "independent nations" which provide a moderate income as well as some special attributes. Exactly as in 1830 these nations are auctioned to the players in the equivalent of the first stock round. Independent nations may be "assimilated" by states later on in the game similar to corporations buying minors in 1830 thereby providing their ability to the assimilating state. As in 1830 the independent nations cease to exist in a later era (phase) of the game.

Land areas are offered to the players at a price depending on the terrain rather than the states. This is one of the major differences to the 18xx series with the consequence that selling land areas usually impacts more than one state. The four types of terrain are: hills, forest, plains and dessert. A fifth type are cities, which have prices depending on the terrain type they are in. Buying and selling of land areas and cities follows similar rules as share buying and selling in the 1830 stock rounds, i.e. selling of areas leads to a decrease in the corresponding terrain price (independently of the state). In addition, players may bid on the "Primagenitur", the equivalent of the priority deal. Money bid on it is temporarily out of the game and cannot be used for buying land areas or cities. At the end of the "stock round" the Primagenitur is handed to the highest bidder and the money used for bidding is returned to the bidder.

Here is another major difference between the 18xx series and Ur: instead of using track tiles players "build" the irrigation system by drawing canals, starting from the rivers land inwards using a felt pen with water soluble ink (Staedler Lumocolor, provided with the game). The ink dries immediately and comes off equally easy using a moist cloth leaving no traces on the board. For all of you who do not particularly like the idea of drawing on the board I suggest you follow Mark's suggestion and buy little blue wooden sticks which can be used as canals instead. Canals are build following a simple set of rules similar to the track laying rules but there is no "upgrading" of canals.

Canals are built by workers (diggers) which are bought from the bank similar to the trains in 1830. Depending on the type of worker they can build canals of a particular length per worker ranging from 1 hex to infinite length (the equivalent of the diesel). The worker cards actually have two purposes: they either function as worker or as waterworks (either reservoirs or pumps). Waterworks are required to pump the water through the irrigation canals and again they can do this only for a particular amount of water (reservoir) or a particular length of canal (pump). In comparison to 1830 waterworks also act similar to the station tokens there because the king of the owning state decides in which directions water flows which reaches the works.

Independent of the type (worker or waterworks) the cards become obsolete similar to trains in 18xx. And also similar to 1830 a state must own at least one worker at the end of its "operation round".

Once all states have performed their building actions the "rain season" starts and water starts rushing down the three rivers of the map. There is a fixed amount of water that actually flows through the rivers, depending on the era (equivalent to the phase in 18xx games). The kings of the states owning the waterworks decide on the route the water takes through the canals built similar to the president deciding about the route of a train of his corporation. The owning state of the last waterworks pumping water to a land area or city receives a share of the harvest for her services from the bank. Additionally the owner of an irrigated area receives a small income, too. The kings of the states then decide what happens to the harvest they received which can either be distributed amongst the owners of the state's land areas (the share holders in 18xx) or be put in the state's treasury. In the latter case the king must destroy one of his lowest valued waterworks as a penalty.

Irrigating land areas or cities also has a positive effect on the land area's price: each region (i.e. adjacent land areas) of one terrain type which is irrigated is counted and the respective terrain price is increased accordingly.

The game ends if either one of the player causes a revolution (goes bankrupt) or if all water flowing down the rivers is distributed to the land areas leaving no water reaching the southern end of the river.

Playing Time: Explaining the rules to someone familiar with the 18xx series should take about 15 minutes; for a newcomer to the series expect at least 30 minutes. The game is played in about 3 to 4 hours depending on the number of players.

Westpark Gamers' Opinion: The game intrigued me quite a bit when I saw it in Essen. It has enough similarities to 1830, one of my all-time favorites. On the other hand there are interesting new elements like the possibility to draw track, i.e. canals, without being limited by the availability and layout of track tiles. Also the mechanics of using the same cards form workers and waterworks sound challenging, leaving you with the new tactical decision of either being able to build canals or to be able to pump water through them.

Compared to 1830 the concept of buying land areas instead if shares generates a completely new feeling and requires a change in strategies. In our first game I found it difficult and challenging to decide which land areas to buy in which nations. First of all there is the same dilemma as in 1830 that you do not want to invest in nations that will not be founded (i.e. float). On the other hand since land prices are based on terrain rather than nation the price of a land area bought may rise even if the nation it belongs to has not been founded. Therefore, in Ur - 1830BC players may buy land based on their assumptions about which type of terrain will be irrigated most.

It could even be a sound strategy to not help another player to found a nation if that player will become king but rather invest in terrain elsewhere, because it is not at all certain that the player in question will actually irrigate your areas. If this strategy alone enables one to win the game is doubtful though, since the bulk of the money is still earned by collecting the harvest of nations with many irrigated areas.

Becoming king of a nation early in the game seems to be even more important than being president of a corporation in the early phase of 1830. Waterworks similar to station markers cannot be changed after being placed but different to 1830 they are sold with increasing capacities. Therefore, the first waterworks placed only have a very small capacity and will hinder a nation building a wide-scale irrigation system later on in the game. Nevertheless, similar to 1830, if these small works are placed strategically well they will have a big impact on the later phases. In order to generate large harvest incomes a king must select the river areas where to place reservoirs very carefully. You need one or two larger reservoirs to be able to pump sufficient water to the fields of your nation. Therefore, different to 1830 placing a small reservoir actually hinders further development also of ones own nation.

Another subtle difference to 1830 is that waterworks may be placed by the king of a nation anywhere on the board irrespective of whether the area is part of his nation or not or if that area is already irrigated (i.e. if track has been laid in 1830). The only condition is that if an area is owned by another player that player has to agree to the placement. This seems to make being king early in the game even more important as is enable one to strategically place waterworks almost anywhere.

After having played the game once I say that the similarities with 1830 or any 18xx series game certainly exist. The different theme of the game however provides a different feeling altogether - at least to me. At no time did I have the feeling to play just another 18xx variant. This is even increased by the fact that the game - in my opinion - needs completely different and new strategies than 1830. While playing I found an enormous amount of decision making and choosing of different tactics and the game session reminded me a lot of my first 1830 session in that respect. Playing the game was a lot of fun then as well as playing Ur - 1830BC now and I am equally keen to find out the possible strategies that lie in this gem of a game. To do so requires to play the game a lot more and I am looking forward already to our next Ur session.