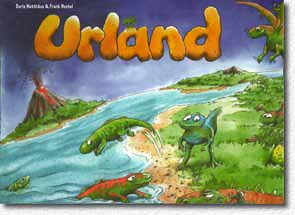 Scenario: 350 million years ago the ichtos (short for ichtyostega) prepared for leaving the oceans and to populate the continents. Which ichtos will conquer the Urland by clever propagation and the use of new genes?

The Game: This tenth game of Doris & Frank uses a similar setting as Ursuppe published 1997. Again creatures controlled by 3 to 5 players try to survive and make the best out of their genes. But this is the only similarity between the two games - Urland uses completely different game mechanics and rules.

As with all Doris & Frank games the game components are very well done and of high quality (e.g. 30 wooden Ichtos in 5 different color; three blank cards for creating own genes) and as usual the gene cards and play aids come in an English and German version. 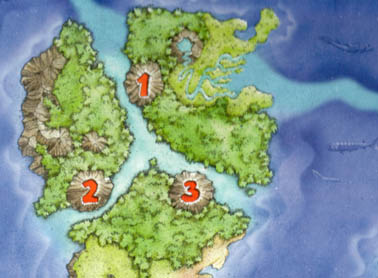 The board is divided into 3 continents each separated into islands (three, four and five, respectively) by little straits. The surrounding ocean is subdivided into 5 areas. Players start their Ichtos in 4 randomly selected islands plus 3 Ichtos in each of the ocean areas and their task is to propagate and move them to land trying to establish a majority on the islands.

Each round starts with the distribution of 3 roles to the players: the start player ("environment player"), the dummy and the ichto player(s). The environment player secretly selects an island that will score this round by choosing one out of three island chips he is randomly dealt. The remaining to chips are then passed on to the "dummy" player who may have a look at them but who is not allowed to reveal them to the ichto players. These actions conclude the turn of the environment player and the dummy player for the complete round, i.e. they will not move any Ichtos on the board in that round. Now it is the turn of the Ichto player(s) who are allowed to perform 2 Ichto actions. There are four actions types to chose from: propagation, move onto land, move between water areas and retreat (i.e. take Ichtos from board back into stock). Genes provide extra abilities which can be used during the action phase but they come into play only after some rounds have been played.

Once the Ichto players performed their Ichto actions the environment player reveals the number of the island that scores by placing the chip he kept on that island. Scoring is straight forward: any minority Ichto colors are returned to its player. Of the remaining Ichto colors the majority holder gets 3 points and the other(s) two points. In case there are identical numbers of Ichtos of each color present all get 2 points. Points are recorded on a score track similar to Ursuppe.

In the next round roles shift in clockwise order, the dummy player becomes the environment player and gets one randomly selected island chip so that he can select the next island to score again from a total of three chips (the two he received from the environment player in the previous round plus the one he just drew). The round then progresses as described above. Eventually, an environment player will not be able to draw an island chip as all but the two he received in the previous round have been placed on the board. This condition completes an epoch and volcanoes erupt on the two remaining islands decreasing the Ichto population there to just one per color present. Immediately before the volcanoes erupt one of the islands is randomly selected for final scoring in this epoch. Each volcano cases the straight between two islands to disappear thereby reducing the number of land areas available for the rest of the game.

Genes come into play three times during the game when the first time a player reaches 12, 16 and 21 points, respectively. At the beginning of the game 4 genes out of the 11 available are placed face up for all players to see. Once the above condition occurs the players start a bidding process for these genes. From the Ichtos not on the board players secretly select a number they want to use for bidding. Players reveal their bid simultaneously and the highest bidder must new select one of the genes on display and remove the amount of Ichtos he used for bidding from the board plus one Ichto for each gene he may already possess. The second highest bidder may now either select a gene and pay or he may pass this right on to the next highest bidder. Once a maximum of three genes have been acquired three new genes are drawn and put on display possibly increasing the overall amount of genes to chose from.

Playing Time: The game can be explained in 10 minutes and played in about 60 to 90 minutes.

Westpark Gamer's Opinion: It was no surprise that the game plays completely different than Ursuppe - the game mechanics are too different for that. The concept of two players not taking an active part in the movement (i.e. Ichto action) phase is new to me and it works surprisingly well. Being the dummy in a round may appear a bit boring as there really isn't anything you can do that round, hence the name. We first thought that we misread the rules because this seemed so unusual but the rules state this quite clearly (as does the German FAQ). Once we got used to this it seemed normal and one of the mechanisms that make the game challenging.

Because of the ever changing roles during the game proper timing is the most important factor for devising a sound strategy. Two consecutive Ichto action rounds in which you have the possibility to rearrange your Ichtos on the board but have no influence on where scoring takes place are following by two rounds in which you cannot move your Ichtos but have control about the scoring location (environment player) or have no control at all (dummy). Therefore most of the time one has to think ahead and consider what one wants to do in the next round and prepare whatever is necessary to do this in the current round. At the beginning of an epoch chaos is predominant as it is almost impossible to judge which location will score. This chaos decreases round by round until close to the end of an epoch certainty prevaeils and you are able to prepare your move very precisely. Unfortunately, this is true for all players and again timing is in issue here when it is necessary to consider which roles you are going to have in the last and one but last round of an epoch.

Genes come into play very slowly, a lot slower than in Ursuppe. A maximum of nine genes are in play (only six in a three player game) therefore having more than two genes per player is clearly an exception. Again, careful planning is required to be able to acquire genes because you need Ichtos off the board to be able to bid. On the other hand these Ichtos are desperately needed on the board for propagation and scoring and even worse, for paying for the genes! This results in a clever "self-regulation" in so far as you cannot bid high even if you have a high number of Ichtos in stock because this may result in near self-extinction on the board. On the other hand if you are strong on the board you could pay a high price but you are unable to bid high as your Ichto stock is depleted.

The genes themselves seem to be well balanced - so far we could not detect a particularly strong one which would result in a certain victory. Gene combinations are not as important as in Ursuppe and anyhow they occur rarely because of the low number of genes in play. At times "Muscles" seemed a bit strong as well as "Warm Blood" but we need to play more often to find if these really influence the game too much.

Overall I really liked the game. The timing strategies are quite challenging and there is still a lot for us to discover in terms of tactics. The game mechanisms are a bit abstract but this is very well counterbalanced by the fun theme, the gene abilities and last but not least the wonderful comic-style graphics of the game components.

I am still not sure whether or not I like the score track rule where positions occupied by other players are not considered when moving forward. This clearly favors players who are behind, yet not too far behind. This mechanism was also used in Ursuppe and I found it a bit too strong there. In Urland the effect seems to be less obvious but there may still be situations when this rule can only be regarded as a nuisance. There is also an additional element of luck in the game in the form of a thirteenth land area "Panic" chip which when drawn by the environment player requires that the land area with the highest Ichto population must be completely abandoned and all Ichtos be moved to adjacent water areas. This slightly favors the weakest player as he is the one to chose the water area in case there is more than one.

Comparing Urland with Ursuppe, Urland can first of all be played in a shorter time. It can also be explained in less time and playing seems to be not as difficult either. However, winning the game is a different matter altogether: here I think that Ursuppe and Urland hold an equal amount of challenges and both require experience and sound strategies to win. To me Urland is a highlight of this year's game releases and a wonderful addition to what may become Doris & Frank's "Ur" series.

Aaron's Rating: not yet ranked

Westpark Gamers' Rating: not yet ranked